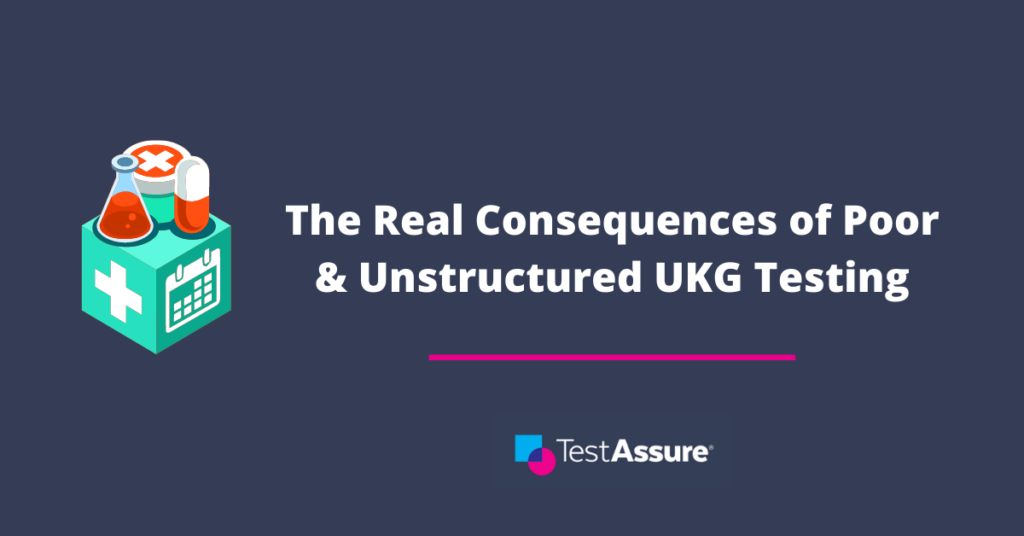 Workforce Management (WFM) is hard, and it impacts everyone across your organization in a real and personal way. It is part of a social contract of remuneration, and it is much more than just collecting punches and sending data to payroll.

Today’s WFM involves complex, ever-changing legislative rules with lots of fine print. The U.S. Department of Labor enforces over 180 different labor laws. Getting compliance wrong on just one of these rules could have a catastrophic impact.

An unstructured testing approach leads to production errors that can impact your workforce, have severe consequences for your brand, and potentially create serious legal issues.

Here are some real-world examples of what happens with poor and unstructured testing:

1. Consequences for Your Workforce

Your workforce is the biggest asset in your business. At a bare minimum, your employees expect you to provide consistent, dependable, and lawful compensation for their work. Breaking this baseline expectation severely damages loyalty, trust, and morale.

The Canadian Government decided to install a new state-of-the-art WFM system to streamline their payment process and ensure employees were paid correctly every time. But with the complexity of pay rules, platform integrations, mounting pressures to release the solution, and limited testing time, they produced a final product that was “completely unacceptable,’ according to Marie Lemay, Deputy Minister for Public Services and Procurement.

In 2018, Recreational Equipment Inc. (REI) was accused of violating California’s work laws. Martha Reilly, who worked at REI from 2007 to 2018 describes being forced to undergo security checks “off the clock.” Also, she claimed her overtime rate was listed at 0.5 times her regular rate instead of the correct 1.5 times her regular pay.

This was a “fat finger” error, and it is a prime example of a simple mistake that should have easily been picked up with good testing. Instead, it was missed, resulting in REI not paying their employees properly for overtime. Issues like this have a very real impact on employees who are relying on their employer to get every dollar correct on their paycheck. But Martha wasn’t the only one affected; there were over 7,000 REI employees who sued REI and won $5 million in a class action settlement.

2. Consequences for Your Brand

When payroll-related mistakes are made, they quickly become public.  Social media sites such as Facebook, Reddit, Twitter, and other platforms are magnets for employees seeking a way to air their grievances.

These sites have become a goldmine for labor lawyers to find their next clients!

Case Study #1:
Starbucks called out on Reddit for forced unpaid overtime by workers.

In 2016, the social media site Reddit was filled with Starbucks employees questioning their “forced unpaid overtime.” Starbucks was asking workers to clock out and stay late to complete closeout activities after the shop had closed for the evening. This publicity ultimately led to a class-action lawsuit being brought against Starbucks.

In 2019, another Fortune 100 retailer experienced defects with its WFM solution deployment. It didn’t take long for frustrated employees in the field to take matters into their own hands rather than waiting for a fix.

This is a great example of a general rule in quality assurance (QA): The cost of managing and resolving a defect escalates quickly once it makes its way to production. Imagine the chaos and loss of productivity as hundreds of locations are dealing with the same issue.

There are many more examples of social media posts where the title alone would make any organization cringe:

3. Legal Consequences for Your Business

Mistakes with your WFM solution do more than impact your workforce and your brand; it can land you in legal trouble. All you have to do is Google “overtime lawsuit” to see how prevalent and expensive compliance issues can be to your bottom line.

With improved communication and social media, a mistake that seems to impact just one employee could be seized upon by opportunistic lawyers seeking a class action lawsuit.

Burberry faced a class-action lawsuit claiming that bosses routinely forced low ranking employees to work overtime for no pay. Sales associates said they were regularly forced to stay an extra 30-minutes to one hour after their shifts ended to clean up the store or file paperwork. The lawsuit cost the company $2.54 million.

West Marine Products, which operates a boating and fishing supply retail store chain across the United States recently settled a class-action lawsuit with 707 former non-exempt employees. Over five years the company underpaid employees by a total of $18,828. The class-action lawsuit settlement amount was $435,000!

There are countless other examples of WFM infractions and defects. Here are just 5 examples that resulted in a total of $356.5M in lawsuit settlements:

Conclusion: How to Get Payroll, Labor, and Compliance Right Every Time

Maintaining labor and compliance laws is a complex undertaking and it’s important to get it right every time for every employee. Mistakes can have a catastrophic impact on your workforce, your brand, your bottom line—and it can land you in legal hot water.

During these times of political, social, and economic change, companies are being forced to update their WFM system, pay, and scheduling policies more frequently than ever before.

To stay competitive, it’s critical to make these changes quickly and effectively while still maintaining normal operations. Putting these changes through a thorough testing cycle allows you to move forward with confidence, but it can be costly and time-consuming.

Thankfully there are proven processes, technologies, and testing automation available to help.

Whether you’re implementing a new UKG WFM system, upgrading to a new version, or releasing business-driven changes, we can help.

TestAssure is committed to providing UKG customers with test strategy, planning, and automation to help you minimize the impact of your system changes, reduce your risks, and help you move faster with confidence.

Make changes to your WFM system with confidence!